A successful development cooperation of already ten years has now been crowned with an order from the aircraft manufacturer, Airbus: Cédric Pujos, Managing Director of Power Automation France and Michel Déléris, Head of Jedo Technologies, have developed a tool for the automated repair of fibre-reinforced plastic parts by waterjet cutting.

A successful development cooperation of already ten years has now been crowned with an order from the aircraft manufacturer, Airbus: Cédric Pujos, Managing Director of Power Automation France and Michel Déléris, Head of Jedo Technologies, have developed a tool for the automated repair of fibre-reinforced plastic parts by waterjet cutting. The innovative PA 9000 Micro CNC control system is also used in the innovative repair robot.

Cédric Pujos is also the founder of the Bordeaux-based start-up CP3i - a team of software developers. He has been working with Michel Déléris and the developer François Cénac since 2007 to counteract the prejudices prevailing in industry against waterjet cutting. In general, this technology is considered expensive and resource-intensive. With his repair robot, Reply.5, Déléris has demonstrated that waterjet cutting offers unprecedented possibilities. Jedo's CEO is optimistic about solutions that are cheap, consume little water and, in particular, do not damage the material to be processed or even peel off its coating.

Automated repair of aircraft parts on site
The technology developed over the past few years, with which fibre-reinforced plastic parts can be milled without detachment of laminate layers, arouses great interest in the aircraft industry. It supports a brand-new application: the automated repair of aircraft parts on the spot by waterjet cutting. More and more composites are used in aircraft construction, even in large parts such as the fuselage or the wings. Up until now, repairs had to be carried out manually in this area, which forced the technicians to work in an extremely unergonomic position.

"We quickly realised that we could create a tremendous synergy effect", recalls Cédric Pujols at the beginning of the cooperation between Power Automation and Jedo: "We combined the know-how in the field of repair applications with our knowledge of CNC, process instrumentation and measurement technology". A rough demonstration model of a waterjet cutting machine was developed. This was followed by a mobile prototype that ultimately resulted in a certified solution for the industry: Reply.5 is an automated, remote-controlled waterjet cutting machine. The suction cups allow fixation of the robot anywhere on the aircraft to repair defective fibre-reinforced plastic parts. The control centre can be stationary or mobile. Reply.5 processes the material without layer detachment, and a monitoring system equipped with a camera ensures recording of the processing results.

PA 9000 Micro CNC in operation
In Reply.5, the "5" in the product name stands for the size of the surfaces to be machined (500x500 mm) as well as the relatively light weight of 50 kg. The repair robot stows itself in its control unit, it can be transported in a container on-board aircrafts as standard air cargo. To achieve the small size, Power Automation has extremely miniaturised the parts of the controller: The new PA 9000 Micro CNC control system is used. The size and weight of the cabling were also reduced by the EtherCAT connection.

The open and flexible system architecture of the PA 9000 Micro CNC enabled CP3i to develop a touchpad and integrate it completely into the Reply.5, including a system for 3D mapping, the necessary business applications and the associated HMI. The robot has a standard power supply of 24V, according to the requirements that it must be usable everywhere and in any environment. Cédric Pujols also praised the easy set-up of the Reply.5, as well as the low power and water consumption and increased safety for users, who are no longer exposed to carbon dust.

The Reply.5 will be used for repairs to the Airbus A350 for the first time in summer 2017. Developer, François Cénac, who is leading the project with his company, Bayab, is already planning to open up further markets, such as wind power and sailing. To this end, a version of the Reply.5 is to be built, which can repair composites parts with dimensions of 2 x 2 metres. 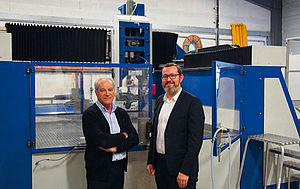